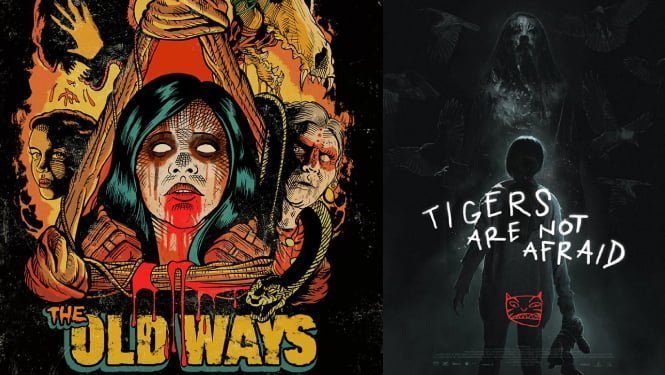 Why I took them off the list: In the run up to Halloween, and in homage to the current season of AHS, I’ve decided to publish a series of reviews homaging the old Double Feature concept of watching movies so lovingly referenced in The Rocky Horror Picture Show.

So, you’ll get 2 reviews for the (free!) price of one, two similarly themed or related horror movies that I think will make a good double bill. And where better to start than 2 recent Mexican horror films, one I missed at the Sitges Film Festival last year but is now on Netflix and getting a lot of buzz, and the second a universally acclaimed effort I’ve been dying to see for ages. So, Lets dig in!

The Old Ways IMDB description: Cristina, a journalist of Mexican origin, travels to her ancestral home in Veracruz to investigate a story of sorcery and healing. There, she is kidnapped by a group of locals who claim she’s the devil incarnated.

Tigers Are Not Afraid IMDB description: A dark fairy tale about a gang of five children trying to survive the horrific violence of the cartels and the ghosts created every day by the drug war.

Review of The Old Ways

Like Eli Roth’s The Green Inferno, The Old Ways is a horror narrative about meddlesome Americans getting in way over their heads when they decide to intervene in things they don’t understand in the deep jungles of South America.

Also like that earlier effort, the film milks the mystique of traditional tribal practices for shock value and has no shortage of gory visuals: blackened organs are pulled out of bodies, bloodied animal carcasses are sloshed around rooms, and eyes are slashed out of their sockets.

What sets them apart, then, is the commitment that writer Marcos Gabriel puts into the characters and tying their journey directly into the story he is trying to tell.

The central character of Cristina here is a much more complex and juicy creation than the one-dimensional protagonists of The Green Inferno. Her motives for getting involved in the drama are much darker, and she goes through an interesting personal transformation through her ordeal.

The Old Ways smartly throws the audience almost directly right into Cristina’s predicament without much build-up and works its way backwards into filling out how she got into this situation and exactly what lies ahead for her.

Exposition is slowly doled out in character-driven scenes that push the narrative forward at a steady pace, with plenty of shocking set pieces and the aforementioned plentiful gore to keep things exciting.

There is also a lot of great subtext and deeper themes going on here. Like the 2013 remake of Evil Dead, The Old Ways uses demonic possession and exorcism as metaphor for horrific real-life issues like addiction and expulsing deep rooted trauma.

It also offers a satisfying journey for an intriguingly flawed protagonist who at first comes across as an entitled, ignorant foreigner. However, it soon becomes clear she is a self-destructive soul actively trying to run away from her roots.

Whereas most possession narratives would be content to end when the demon is finally exorcised and send the characters off to a happy ending, The Old Ways is only getting to the end of its second act and has a far more ambitious story it wants to tell. In this case, the demonic infestation was only merely a symptom of the protagonist’s malaise and not the root cause, and she still has some way to go to complete her journey.

Yes! While not for people with weak stomachs, those looking for a smart horror narrative are likely to be immensely satisfied by The Old Ways.

Review of Tigers Are Not Afraid

Although set in the same country, Tigers Are Not Afraid takes place in a world far removed from the steaming jungles depicted in The Old Ways, in the unforgiving, decaying urban sprawl of Mexico City. It also weaves in its horror elements in far more subtle ways. It is really more of a fantasy drama than a full-on horror flick.

Taking an approach reminiscent of Guillermo Del Toro’s Pan’s Labyrinth, it’s the disturbing story of a gang of street kids orphaned by the insidiously pervasive and inescapable cartel violence that permeates their neighbourhood, and their attempts to deal with the real-life terror with the tools available to a child’s mind.

That’s not to say that the film is lacking in downright terrifying imagery: a sinisterly snaking line of blood appears to indicate the next victim of the brutal adult gang members, and protagonist Estrella is seemingly haunted by the disturbing ghost of her mother, who is bloodily wrapped in plastic and moves in an unnervingly herky-jerky manner.

But these elements are sparingly used, and the film is first and foremost a harrowing but ultimately powerful story of kids finding a way to triumph over an impossible situation.

Excellent in Every Way

The most powerful thing about this excellent film is the way that it shows the coping mechanism of its central protagonists filtered through the children’s endlessly magical thinking. For example, pieces of chalk become magical wishing sticks that remove the need for them to directly get their hands dirty in dealing with their issues, and a soft toy tiger springs to life to guide them through harrowing obstacles.

The kids all give startlingly good performances for child actors, particularly Ramón López as the heartbreakingly hardened young group leader Shine. Tenoch Huerta also makes for a chilling villain in a brief appearance as the seemingly upstanding politician overseeing a dark underbelly, boding well for his rumoured upcoming turn as Namor in the Black Panther sequel.

The photography is also incredibly beautiful at times despite the grimness of the setting and the subject matter. The image of a burning grand piano inside a run-down building and the sight of exotic goldfish cut loose in a dirty pond stick in the mind and hint at the hope of beauty among all the corruption and decay.

Yes! I cannot recommend this beautiful, troubling film enough. Whether you’re a fan of horror or not, the powerful acting and bittersweet but satisfying narrative make this a must-see for all true cinephiles.

Stay tuned for my next horror double feature in the run-up to Halloween!