Hypochondriac (2022) IMDB Description: “A young potter’s life devolves into chaos as he loses function of his body while being haunted by the physical manifestation of his childhood trauma.”

Why I took it off the list: As a huge fan of Donnie Darko, I couldn’t help but be intrigued when I saw the poster for a film with a young man being haunted by what looked like very Frank-the-bunny-esque figures. After checking out the awesome trailer and leaving convinced this wasn’t just a Darko knock-off/cash-in, I definitely had to watch it.

Add to this the fact that the central protagonist of Hypochondriac is a young gay man trying to live a ‘normal’ life while being beset by past traumas and mental illness (something pretty close to the bone for me). So, I decided I needed to see it as soon as possible, even if was definitely going to be a tough watch. Still, reviews were overwhelmingly positive, so I was convinced I was in for a satisfying (although disturbing experience).

My initial plan was to review it alongside B&B (2017) for a Halloween Double Feature, but anyway, here is my review: better late than never! 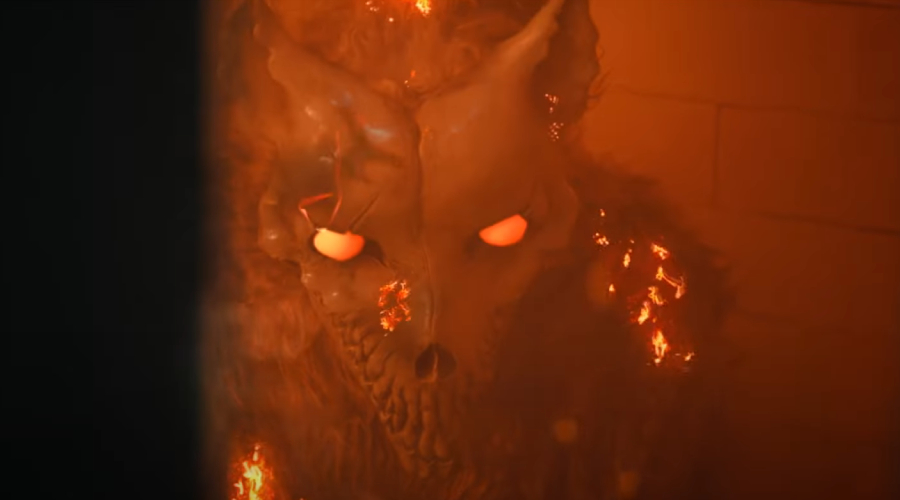 The fact that Hypochondriac starts with a title card reading ‘ Based on a real breakdown’ is the first hint that we’re not looking at your typical exploitative, jump-scare-filled horror film. This is followed by an evocative piece of old-school home video showing a little boy dressed in a wolf costume as his mother encourages him to howl for the camera.

In the next scene, the same little boy is jolted awake in the middle of the night by his mother, who is clearly having a psychotic episode, and whisked away to a motel. There, in her paranoia, she tries to strangle him to death, before having second thoughts at the last minute.

Cut to 18 years later, and the boy, Will, is all grown up and working as a ceramicist at a ‘high-end pottery’ company run by the insufferable influencer Blossom (Madeline Zima of the Twin Peaks Revival). Full of zappy sass and endless energy, Will seems to have it all together, even helping a colleague out of a panic attack. At home, he has a cute boyfriend (Devon Graye of American Horror Story: Asylum) and seems to be pretty content.

However, there are instances where you feel that his evergreen cheerfulness might be a bit of a facade to cover up unwanted feelings, something that becomes clearer when his mother contacts him for the first time in 10 years. Will has been going around telling people she’s dead, but this isn’t exactly the truth: one day he receives a package full of his old things and an audio message from his mom, which seems to majorly shake up his equilibrium.

Carried by the Excellent Zach Villa

What follows is a visceral and often disturbing descent into mental illness, amplified by some incredibly creative camerawork and editing, and creepy sound design. The film has shades of the excellent Excision (2012) in its energetic and inventive execution. It also treads similar territory as Hereditary (2018) and Channel Zero: Butcher’s Block in effectively treating the threat of inherited mental illness as a true, tangible horror scarier than any slasher villain.

Although Hypochrdiac can often be incredibly unsettling, director Addison Heimann clearly doesn’t want it to be a completely feel-bad experience, and the film is also filled with funny visual flourishes and some great dark humor. For example, there’s a hilarious scene where WIll attempts to self-diagnose himself by googling his symptoms, which to his horror leads to the absolute worst-case suggestions on the search engine’s part: something I think we can relate to and laugh about!

Much of the humor and charm of the film comes directly from lead actor Zach Villa, who played Richard Ramirez in American Horror Story: 1984 to chilling effect but gets to sketch out a much more amiable and likable character here. Villa uses his wide eyes and cheeky expressions to kind of make you fall a little bit in love with Will, and you really feel for him when he starts going through the mental wringer. Likewise, his relationship with Graye is adorable and you’re rooting for them to overcome the considerable obstacles Will’s mental state throws up.

Luckily, despite a rather harrowing third act, the film ends on a hopeful and cathartic note, and the proceeding ordeal ultimately feels more therapeutic than traumatic, both for Will and for the audience.

Yes, Hypochondriac is more of a harrowing drama about a descent into mental illness than a straight-up horror, but it’s a powerful one at that. Engrossing, inventive, and powerfully acted, it’ll stick with you long after its haunting final shot.

Written and Directed by Addison Heimann