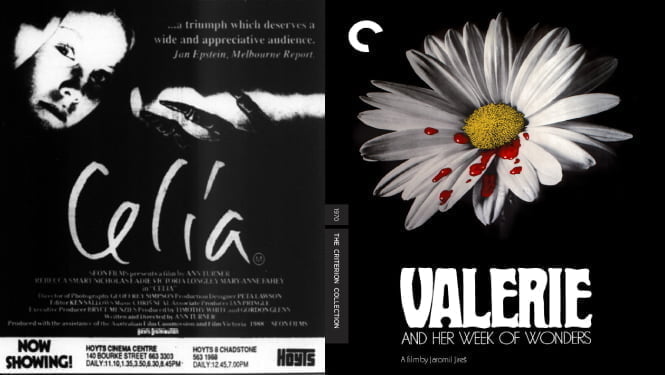 Why I took them off the list: I decided to stick with the themes of the second film in my first double feature review, Tigers Are Not Afraid, and check out 2 classic dark fantasy films told from a child’s point of view.

I’d never seen either and both are widely considered to have greatly influenced later entries in the genre that I love such as Pan’s Labyrinth (2006) and The Company of Wolves (1984). So, let’s dig in!

Celia IMDB description: An imaginative and somewhat disturbed young girl fantasizes about evil creatures and other oddities to mask her insecurities while growing up in rural Australia.

Valerie And Her Week of Wonders IMDB description: Inspired by fairytales such as Alice in Wonderland and Little Red Riding Hood, it’s a surreal tale in which love, fear, sex and religion merge into one fantastic world.

The trauma in this dark coming-of-age story starts early for the young protagonist: within about 2 minutes Celia has already found her beloved granny dead in bed.

The trauma only continues as she befriends the kindly mum who moves in next door with her brood of kids, only to be told she can’t play with them anymore because they’re ‘commies’: Australia is right in the middle of the ‘Red Scare’ of the 1950s and the family are treated like pariahs.

Next up, the pet bunny she has lobbied so hard for is branded an enemy of the state due to the plague of wild rabbits ravaging the country’s agriculture, and promptly confiscated. Then her stern father decides to hold a surprise bonfire of dearly departed granny’s leftist literature, lest his family be branded communist sympathisers.

After all this, and more, it’s no wonder that that the poor girl develops somewhat maladaptive coping mechanisms.

After her teacher reads her class the (pretty disturbing) Australian fairy-tale The Hobyahs, Celia begins to imagine these goblin-like creatures as a real threat, constantly trying to sneak in her window and cause her harm. She then resolves to fight back against the monsters, with tragic consequences as her fear-fuelled fantasies clash with the reality around her.

Reminiscent of Spanish-language classics El Espiritu de la Colmena (1973), El Laberinto del Fauno (2006), and El Espinazo del Diablo (2001), Celia is an evocative look at the world of the titular character through her eyes and an exploration of the sometimes maladaptive coping mechanisms she uses to make sense of and overcome difficult real-world obstacles to her healthy development.

It’s an often touching film, with young actress Rebecca Smart eliciting a great deal of sympathy as the somewhat troubled Celia. However, she can often be terrifyingly cruel at times, something the young thesp balances well with her softer side.

Celia also benefits from a perfectly-matched musical score and period costuming and production design that bring rural 1950s Australia to vivid life. The cinematography is also impressive, particularly in a sequence where Celia imagines her world turning into one of the black-and-white American detective films she’s used to seeing at the movies with her family.

The visuals of the elusive Hobyahs are also eerie and striking when they do sporadically appear, though the film wisely keeps the beasties largely offscreen and lets effective sound design do much of the work. The monsters only really fully reveal themselves to Celia in the shocking climatic scene, when reality brutally crashes into the little girl’s fantasy world.

Yes! Although the story ends with a somewhat abrupt conclusion that leaves some disturbing questions unanswered, Celia is a richly evocative and insightful coming-of-age story that has aged pretty well. You can watch the full movie on YouTube!

Written and Directed by Ann Turner

Review of Valerie And Her Week Of Wonders

Considered one of the last films of the Czech New Wave, which gave us delightfully creative classics like Closely Watched Trains (1966) and the wonderful Daisies (1966), it’s actually something of a minor miracle this film was produced in communist-run Czechoslovakia at all, given how subversive some of its scenes are.

Valerie and Her Week of Wonders opens with a dreamlike credits sequence and fairytale-esque music before introducing its central character asleep in a barn that feels like it could be from any time or any place. Then a man, who we later find out is her brother, appears and steals her earrings, which we saw earlier dangling above her breasts during the credits.

The fact that a demonic, vampire-like creature covets these ‘earrings’, as well as the presence of imagery such as droplets of blood spilling onto bright white daises, cues us in early on that the film is going for a heavily symbolic and lyrical decption of the loss of innocence, and not so much for spelling out a conventional narrative.

The biggest thing that Valerie And Her Week of Wonders has going for it is the gorgeous painterly visuals and lush production design. It is packed full of idyllic tableaus suddenly interrupted by startling and often disturbing imagery that feels like it belongs in a full-on horror film.

It eventually reveals itself to be a kind of vampire story, but never fully succumbs to that vibe because of its generally wistful and playful tone. The excellent costumes and make-up of the often bizarre characters add to the appealingly off-kilter vibe of it all. Among the performers, I have to give a special shoutout to the actress who plays the granny, who has a Tilda Swinton-esque level of ethereal intensity.

Neverthless, unlike Celia, the film feels somewhat dated. In particular, the sometimes uncomfortably fetishistic focus on young Valerie is a bit icky. Those looking for a straightforward narrative are also going to be sorely dissapointed, as this is the kind of film that has to be felt through rather than reasoned with.

It depends. Valerie And Her Week of Wonders is undoubtedly an impressive visual masterpiece, but if the heavy symbolism and obtuse narrative of something like The Company of Wolves turns you off, then this week of wonders is probably not for you.

Stay tuned for my next Double Feature review of two offbeat takes on familiar genres from the 2021 edition of the Sitges Film Festival!