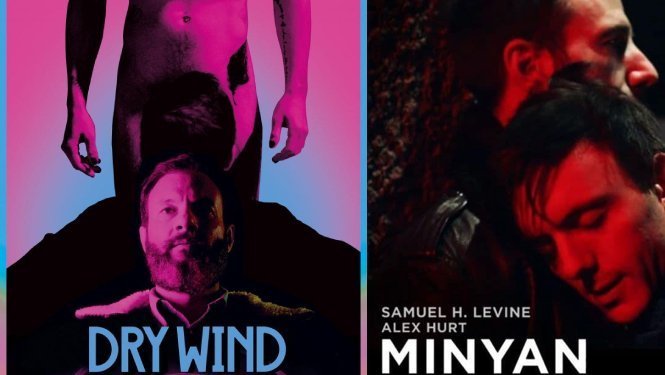 Dry Wind IMDB description: “The area around Catalan in Brazil’s state of Goiás is dry, very dry. Sandro’s life here is just as dry–somewhat monotonous. He works in a fertilizer factory and divides his days between the city club, work, soccer with friends, and city parties. He has a purely sexual relationship with his colleague Ricardo.

He always seems to be an outsider, not comfortable in his own skin, not really belonging. When Maicon, a man straight out of a Tom of Finland illustration, shows up in their small town and flirts with Ricardo, Sandro’s burgeoning feelings of jealousy set a change in motion.”

Minyan IMDB Description: “A young Jewish man is caught between thrilling private trysts and his repressive family in this thoughtful drama set in 1980s Brooklyn.”

Why I took them off the list: After reviewing gay romances Cicada (2020) and Sublet (2020) as a Double Feature for Valentines, I decided to take a look at two other recent gay-themed flicks I had on my list that take a somewhat darker, more dramatic approach. So, let’s dig in!

A highly accomplished feature fiction debut, Dry Wind sees documentary filmmaker Daniel Nolasco turn his eye to the story of a repressed gay man living in the countryside of Brazil, specifically in his hometown of Catalão. The life of Sandro, a worker at a fertilizer factory, is mundane and uneventful, signified by the recurring constant weather forecast plastered onscreen during his daily drive to work: dry, some wind.

The unsatisfying life of this reserved figure is signified in another, altogether more revealing way, however: Sandro experiences vivid, neon-lit fantasies of submissive men clad in leather who beckon to him seductively, exposing his deepest desires. What’s frustrating is that these fantasies are not so far out of reach: he’s already engaged in steamy trysts with an attractive co-worker, although he keeps him at arm’s length, not daring to publicly acknowledge the relationship.

However, the arrival of Maicon, an outlandishly desirable beefcake, at the factory seems to drive his desires out of control, and all signs point to this tragically repressed man being pushed to some terrible, violent limit. To Nolasco’s credit, though, and in a similar fashion to the Benedict Cumberbatch-starring The Power of the Dog (2021), this not exactly the predictable narrative route the film ultimately takes.

Gloriously Plays with Genre and Expectations

For much of the run time of Dry Wind, it seems like we are in for a story about the dangers of lustful desire and random hook-ups, a la Stranger by the Lake (2013), as Sandro seemingly becomes more and more unhinged by his frustrations to consolidate meaningful relationships and appears to teeter on the edge of doing something rash.

The ambiguity of the film’s story remains constant almost right up to the end, buoyed by Nolascos’ use of tense close-ups, heightened production design and lighting that blurs the line between fact and fantasy, and a musical score straight out of a Hitchcock thriller.

There are hints throughout, though that a tragic, blood-spattered finale is not the director’s ultimate end-game, most notably through the quiet, sensitive performances given by all of the core cast, and the lovingly shot, unsimulated sex scenes scattered throughout the film. It’s almost a relief when the final scene unfolds and you realize this is a celebration and affirmation of gay love, not a condemnation.

Yes. Even if a drama about repressed homosexuality featuring full-frontal male nudity and unsimulated sex acts might not sound like your cup of tea, Dry Wind may just win you over with its playful mystery of a narrative and some impressive cinematic flourishes.

Written and Directed by Daniel Nolasco

Another feature narrative debut from a primarily documentary-focused filmmaker, Minyan is a mostly by-the-numbers coming-of-age story about a young gay man torn between his conservative family ties. Cue cliche scenes of an inspirational English teacher who just happens to proscribe a novel relevant to the protagonist’s story, and the obligatory tentative first visit to a gay bar.

However, the film is lent some unique flavor by the setting – a convincingly recreated 1980’s Brookyln, and the cultural backdrop – the city’s Jewish community, to which young David finds himself inextricably bound by family ties. The strong obligation David feels towards his elders and preserving his heritage as he attempts to navigate his own identity is well-conveyed, and the shadow of the pain of the holocaust feels palpable among the older generation.

Let Down by Questionable Casting and Resolution

The story of Minyan is ultimately one about finding one’s tribe, and the journey of David towards tolerance and acceptance is ultimately a worthy one, but something feels a little bit off about the resolution. Ostensibly a story about a man finding balance between his faith and sexual identity, the film gives the key gay relationship in the film, between David and a hunky barman, disappointingly short shrift, and the union is brushed aside with a line invoking the fear of the growing AIDS epidemic.

While this may be understandable given the time period, and the focus on David embracing his Jewish identity is commendable, it still feels like maybe a little more hope could have been afforded towards his future romantic prospects.

The film also feels a little bit let down by some puzzling casting, most particularly Brooke Bloom as David’s middle-aged mother: the actress is clearly in the same age range as Samuel H. Levine, who plays her son, and her old-lady mannerisms fall a bit flat. Levine, meanwhile, has a haunted and reserved manner that conveys his guilt and shame well, but is not that convincing as a supposed 17-year-old.

The veteran actors in the cast fare much better, and arguably make the film. Alias‘ Ron Rifkin is fantastic as David’s kind, world-weary grandfather, while Marc Margolis and Christopher McCann bring real gravitas and presence to the roles of his nieghbors, seemingly closeted gay men who David comes to identify with.

It depends. Minyan can be slow-going, and takes an awful long time to outline a story that doesn’t really prove to be too revelatory or progressive. Still, the convincing portrayal of 80’s Brooklyn, interesting insights into Jewish culture, and some fine performances make it worth a watch.

Written by: David Bezmozgis (based on the short story by), Daniel Pearle, Eric Steel 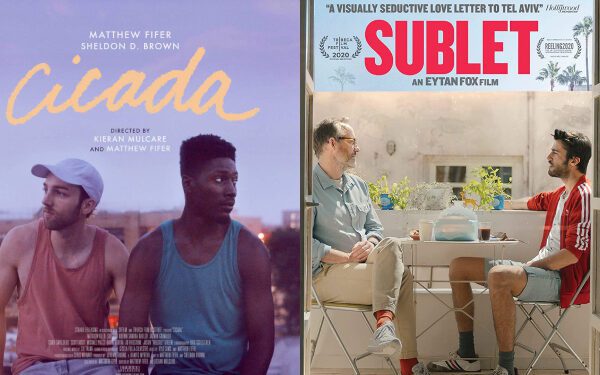