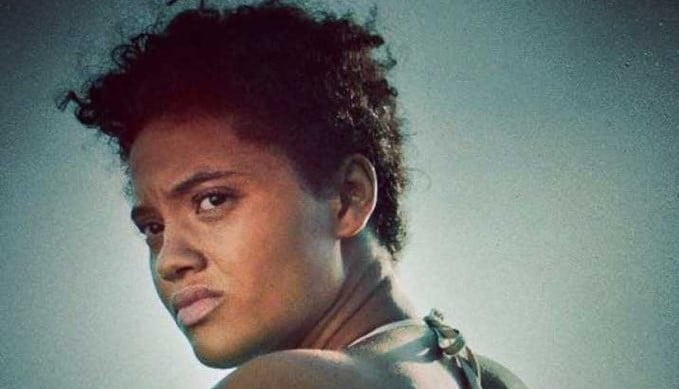 IMDB description: “Jenn has washed ashore a small tropical island, and it doesn’t take her long to realize she’s completely alone. She must spend her days not only surviving the elements but must also fend off the malevolent force that comes out each night.”

Why I took it off the list: I was in the mood for a good summery horror/thriller. While still waiting for M Night Shyamalan’s mystical beach-set Old (2021) to come out, I decided to check out another film about a nightmarish tropical paradise I’d been meaning to watch for a while.

Sweetheart came out of seemingly nowhere a couple of years ago to glowing reviews. Although It didn’t seem to make much of a mark on the popular consciousness, the strong reception and its pedigree as a Blumhouse production – they also produced Get Out (2017), Us (2019), and the underrated The Hunt (2020) – made me excited to see it.

I also love a well-made creature feature, and I’d heard that Sweetheart turns out to be one of the best monster films to have come along in a good while. So I was firmly on board.

There’s no getting around it: Sweetheart has serious Lost (2004-1010) vibes. There’s the mysterious tropical island. A motley group of survivors who wash up on its shores. Something dangerous and possibly otherworldly lurking in the jungle, waiting to strike.

But where that long-running (and often infuriating) show got Increasingly bogged down by its convoluted mythology and packed roster of characters competing for the spotlight, Sweetheart keeps it sweet -pun intended!- and simple.

Director J.D Dillard smartly sticks to a pared-down story with a deep focus on the minute-to-minute actions that one woman needs to take to survive on a similarly treacherous island, and it is smartly paced and holds attention throughout its lean run time.

He’s ably helped by his leading lady, Kiersey Clemons. She gives an engaging performance as the alternately tough and vulnerable Jenn, who is sympathetic and easy to root for. Unlike many a horror protagonist, she makes all the right decisions under difficult circumstances. Clemons sells her smart yet increasingly desperate actions throughout and keeps you fully invested in seeing the character prevail.

Many horrors in the ‘tropical holiday gone wrong’ subgenre fall into the trap of incessantly beating the audience over the head with in-your-face gore and graphic body horror shocks (e.g The Green Inferno (2013) and The Ruins (2008)). However, Dillard follows the lead of the best monster flicks in ominously building tension with subtle omens of unease and subtly suggesting the threat rather than outright spelling it out.

For the best part of the runtime, the monster is largely kept-off screen, shown in quick close-up flashes or shrouded in shadow, or observed from a distance, as it should be! When the creature is eventually unveiled in its full glory, it’s way more impactful than if it had just been presented up-front from the start, chasing Jenn down the beach in the glare of the sun.

When we do get a good glimpse of it, the creature reveals itself to be a thrilling unique creation which I won’t spoil too much, only to say it is a pleasingly odd beast that feels both weirdly natural and freakishly otherworldly. Dillard largely eschews CGI work in favor of so-real-you-could-touch-it practical effects, and as such it cuts a scarier and more imposing figure than most movie monsters in recent memory.

One memorable sequence that sees the creature attack Jenn in the water even manages to evoke the majestic eeriness of some of the best scenes from Creature from the Black lagoon (1954). I couldn’t really offer Sweetheart higher praise, as that is one of the all-time monster movie classics in my opinion.

The social commentary that the film tries to sneak in with the somewhat ironic title and Jenn’s interactions with a couple of other castaways who eventually show up don’t work as well, but ultimately they take a backseat to the visceral survival story at its center.

The film continues its unrelenting tension all the way to the thrillingly fiery dénouement and a clever final shot that keeps you guessing until Dillard eventually cuts to black.

Yes, Sweetheart is a creature feature that knows what it’s doing. It smartly keeps the focus on the survival struggles of its main character while sprinkling in restrained doses of insidious monster threat, and expertly builds tension right up to its thrilling finale.

Stay tuned for my next review, a horror TV show that, like Sweetheart, uses its monsters sparingly.